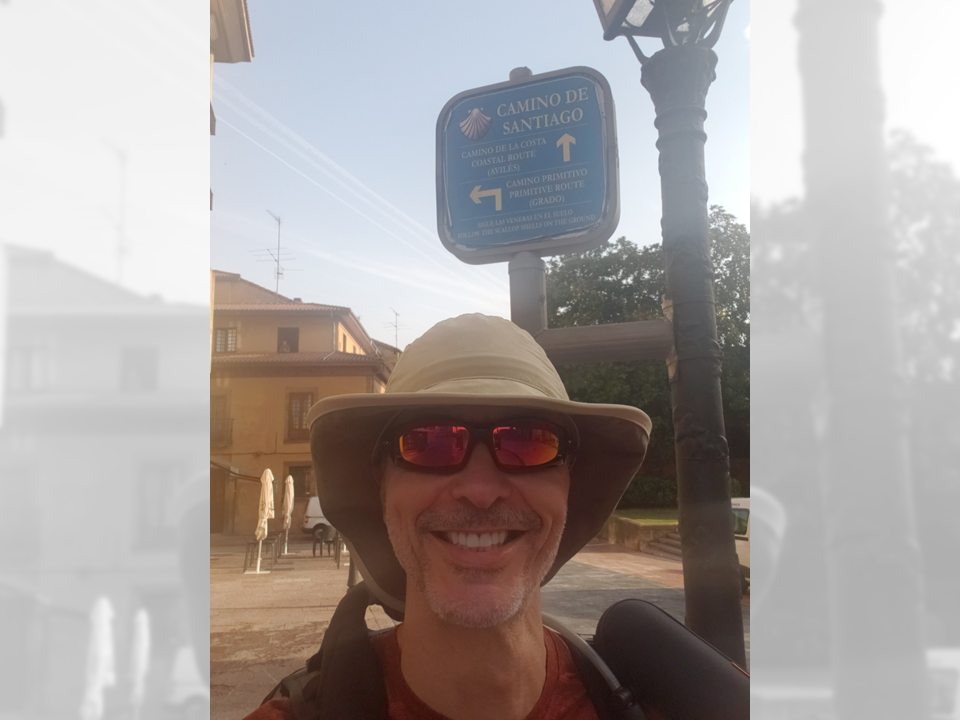 In July, I hiked El Camino de Santiago (The Way of St. James) in Spain. I hiked the route called El Primitivo (“The Original”), which was 200 miles from Oviedo to Santiago de Compostela. For me, as for so many other pilgrims who do the hike, it was a life-altering experience. There are so many lessons I learned along the way (El Camino), about myself, about relationships and about culture. I will be sharing several of the most salient lessons here.

Anyone who has found a modicum of success will likely recognize that, in our culture, control is seen as a positive thing. Most successful people have an internal locus of control, or a belief that the more they can anticipate or predict what comes next, the more they can influence the events toward a desired outcome. Having control in or over a situation or circumstances reduces our angst about said situation or circumstance. Let’s just say, I’m a fan — or I have been.

My desire for control became evident to me on Day 1 of El Camino. Here is a pic of me on the very first day at the start of El Camino Primitivo in Oviedo, Spain.

On the top left of the sign over my head you can see a scallop shell, which is the ubiquitous symbol to direct pilgrims in the right direction, to ensure they are following the way. In a major town, like Oviedo, they are found on the ground like this.

When you are outside of a town or village, there are pillars with a scallop shell and an arrow pointing the way. They look like this.

For the most part, El Camino is very well marked. But I found myself anticipating a fork in the road up ahead, reaching for my phone, and looking at a digital map to see which way I needed to go. When I was in Oviedo, a major city, it didn’t seem like a big deal. It struck me most when I was outside of Oviedo, in the woods. I felt myself reaching for my phone earlier and earlier, until I was basically walking with it in my hand. The information it could provide lowered any angst I had about getting lost. Some of you may think, “That’s fine.” Or, “That makes sense.”  But here’s the thing …

By keeping my head down, eyes buried in my phone, I was missing what was going on around me! The way was well marked. I just needed to get to the turn or the fork and look up. The scallop shell or the arrow was there — usually before I would need it.

When we over-rely on what we already know – what we can control —we rob ourselves from learning something new.

For me, the lesson came in the form of trustful surrender. To trust that if I kept my eyes up (rather than buried in my phone), that when I got to a decision point (or before) a sign would appear – literally and figuratively. Full disclosure: I didn’t like it. At all! But the more I resisted, the harder it would become to learn and the more I would miss along the way!

So I stowed my phone, pulling it out only to take pictures, such as these:

I kept my eyes looking forward, learning to relinquish control, learning to practice trustful surrender, putting one foot in front of the other until the lesson was learned.

Control may reduce our angst, but it requires us to anticipate, predict and prepare for what comes next. In many circumstances, that is a good thing. In others, not so much. Control robs us from being and staying in the moment. If you want to gain confidence, be flexible and learn how to best respond in the moment, you must be in the moment. This requires us to relinquish control, and trust that if we keep our eyes looking forward, we will see what we need to see to make the best decision, in that moment, along the way.

I will be sharing additional lessons from El Camino over the next several blog posts. So I will close with a farewell that is ubiquitous along the way:

Happy Thanksgiving!
Read more
Individual Reality and the Fork in the Road
Read more
What is the Nature of Reality?
Read more
See all blog posts