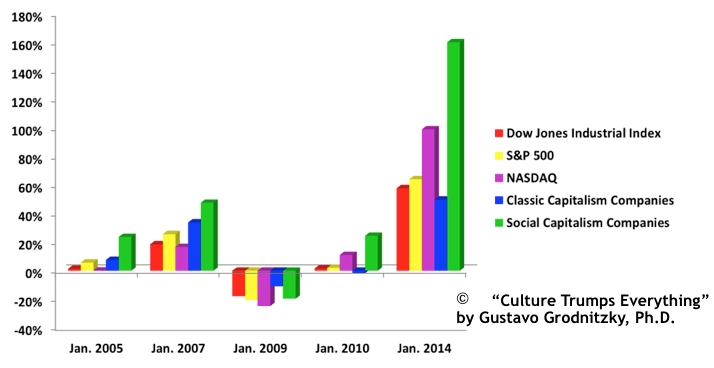 Companies that operate on the premise of classic capitalism believe that it is the role of owners and investors in the organization to create a machine of business that creates profit that is then returned to owners and investors, otherwise known as shareholders. In contrast, social capitalism companies believe that is the role of the leadership of the organization to create a culture that considers all of its complex constituencies otherwise known as stakeholders. A stakeholder is anyone who comes into contact with your product or service. So business partners, suppliers, employees, customers, shareholders, as well as the community, society, and the environment are all stakeholders in the organization.

Over the past 10+ years, social capitalism has outperformed classic capitalism.

This creates what I refer to as the profit paradox: Companies that pursue profit directly (classic capitalism) make less profit. Companies that understand that profit is a result of creating and sustaining an outstanding organizational culture that takes into consideration all of its stakeholders (social capitalism) make more profit.

The graph above illustrates the change in stock price of the three major market indexes (Dow Jones, S&P 500, and NASDAQ) between 2004 and 2014. It also shows the performance over the same period of classic capitalism companies. But these aren’t just any classic capitalism companies -- these are the remaining companies identified in a very famous business book published in 2001, Good To Great by Jim Collins. In Good to Great, Collins identified 11 companies that he considered successfully moved from good to great because of their ability to create a return for their owners and investors, or shareholders (classic capitalism).

So why stay with classic capitalism? Classic capitalism relies on business norms which are clear, well defined, and require quid pro quo behaviors. Social capitalism relies on social norms, which are more ambiguous. This means leaders in companies that rely on social norms must manage anxiety -- both their own and their investors'. This means it requires strong and courageous leaders who believe that culture precedes profit to establish a culture where all stakeholders are considered and profit follows. Social capitalism relies on the social norms applying primary human drives to connect, to belong, and to drive behavior rather than just financial exchange. When you create a culture that is based on social norms, you get behaviors from your employees you cannot buy, sell, or trade -- and these are the behaviors that most drive organizational success.