6 Things You Should Know About Generation Z 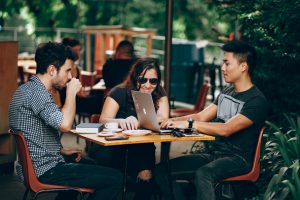 I’ve been working with companies trying to manage a multigenerational workforce for almost 12 years. Until lately, the focus had always been on Gen Y or Millennials, the generation of people born between 1982-2000/01, as defined by “The Fourth Turning” by Strauss and Howe.  But recently I have been doing more reading and speaking about the generation following Millennials. I’d like to share some of what I’m finding.

People born in 2001 or later are most commonly referred to as Generation Z.  You’ll also hear and read iGen, eGen, Homeland Gen, Screen Gen, etc.  Nothing has stuck.  The most commonly used name continues to be Gen Z.  They are the children of Gen X – those born 1965-1981.  While Millennials were shaped by the overprotective “helicopter parents” of the Baby Boomer generation, Gen Z was raised by “lawnmower parents” who cleared a path for them. These Gen X parents are also sometimes referred to as “drone parents” because rather than hovering, they observe from a distance to ensure things go as planned – like a camera drone. However, should you cross their child (treat them in a way they believe is unfair or unjust) these parents will quickly go from being a camera drone to a predator drone – attacking with everything they have at their disposal.

With that as a backdrop, here are some of the things I find most interesting about Gen Z:

By 2044, the U.S. population will be a majority-minority population – whites will represent 49% of the population being the largest minority. Gen Z is the leading edge of this demographic shift.

Gen Xers and earlier generations tend to think of social media as being a step removed from “real life.” But for many Gen Zers, that distinction just isn’t there. They feel a genuine connection – and share the full range of emotional experiences – using technology. Anecdotally, I have friends with teenagers who have “dance parties” in front of their computers. They’re all dancing in their individual rooms, together.

However much they love interacting online, members of Generation Z know there’s no privacy there. Meanwhile, as they prepare to enter into the workforce, they have seen the challenges that tech-loving Millennials have had with face-to-face conversations. Perhaps because of those two factors, Gen Zers actually want more in-person communication at work. But they may need extra support to master the soft skills necessary to become effective face-to-face communicators.

Snapchat and Instagram are their go-to social media site.  They are also very devoted to Youtube.  They see Facebooks as their parents’ social media. When Instagram added a short video feature in August 2016 (a la Snapchat), many more Gen Zs began to migrate to Instagram.

Gen Zers’ social media circles dictate the news stories or topics to which they are exposed much more than previous generations. Titles must be short, pithy, and compelling. According to many new stories, U.S. Rep Alexandria Ocasio-Cortez seems to have mastered communicating with Gen Z on social media.

In 2015, there were all sorts of pronouncements discussing a “pivot to video” for internet content.  While YouTube and short-form video apps such as MarcoPolo and TikTok are certainly important to this generation.  The devices they carry are more and more powerful, enabling them to capture and edit video on the fly.  But they still read to gather information. Pew Research predicts this will be the best-educated generation to date.

Have questions? Don’t hesitate to reach out and ask.